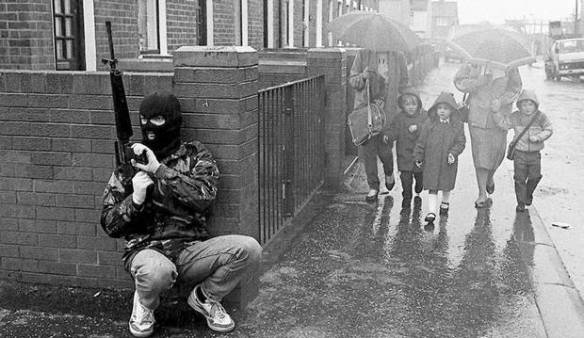 “The Troubles” in Northern Ireland

Imagine our schools patrolled by armored vehicles and soldiers with semi-automatic weapons because of the fear of violence.

This is not something I need to imagine. It is a memory.

I grew up in Belfast, Northern Ireland, during a period of armed struggle known as “The Troubles.” I still carry the memory of soldiers and tanks in front of my school, St. Genevieve’s. I fled the violence of Northern Ireland, fell in love with and married an American soldier, and resolved to raise my children in the peace and safety of the United States of America.

So, when I now hear some say that the only remedy to the massacres that have become all too common in America’s schools is to turn them into armed camps, I am horrified. Let me tell you from first-hand experience, seeing a tank or an armed soldier in front of your school does not make you feel safer. That is the past I fled, and I will do everything in my power to make sure it is not our future.

I am inspired by the voices of the students at Marjorie Stoneman Douglas High School decrying the failure of our so-called leaders to protect them. One of the reasons I am running for Congress against Lee Zeldin is that he is complicit in that failure. Because of people like Congressman Lee Zeldin and Speaker Paul Ryan, we cannot make any progress on reasonable measures that will protect our children.

As the wife of a decorated veteran and New York City Police Officer and the mother of two active duty soldiers, I support the 2nd Amendment. And yes, I know how to shoot a gun too. But I also support common-sense laws to protect Americans.

For instance, I support the Department of Homeland Security’s “no fly” list, which says that certain people are such a threat that they shouldn’t be allowed to board a commercial aircraft. I imagine you do too. Yet, the House of Representatives will not pass legislation to prevent those same people from buying a gun.

Think about that for a minute. There are people we deem so dangerous that we will not allow them to step foot on an aircraft, yet those same people can legally purchase military-style assault weapons and unleash terror in any school in America. That is just the tip of the iceberg of Congress’ failure to enact common-sense laws to protect us.

Lee Zeldin is proud of his “A” rating from the National Rifle Association (NRA). An “A”?

That’s absurd. It is impossible to represent the interests of Suffolk County and be in 100% agreement with the NRA. How do you earn an “A” from the NRA? Among other things:

We can do better. Let’s tackle the factors that lead to school shootings head on. We need to ban assault weapons from getting into the hands of civilians. If someone wants to have an assault weapon, then they can enlist in the military or law enforcement. People suffering from mental illness need help, not weapons. Let’s say that if you can’t board an airplane, you can’t buy a gun. Let’s have a federal background check system that does proper background checks. We must reject the false choice that we must either surrender our 2nd Amendment rights or turn our schools into armed camps and our teachers into snipers.

Let’s protect our kids with actions, not words. The answer to gun violence in schools is not to put more guns in schools, it is not to make our schools into fortresses. I am still the same hopeful immigrant who believes in the promise of America, and I know that we can do better for our children.