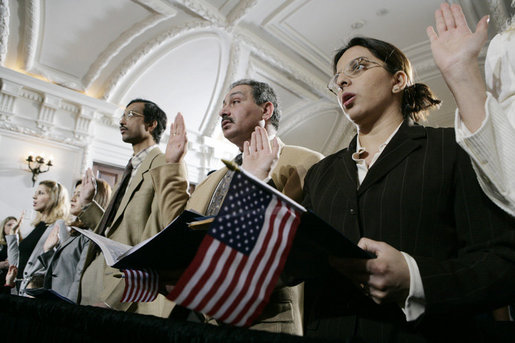 I received this great story from a friend:
I am very pleased to say that just before leaving for Europe, I took the oath of allegiance and am now an American citizen (even managed to get a passport in time to travel). I would not mention it if it were not for the pretty extraordinary statement made by the Federal judge who presided over the ceremony. A naturalized citizen himself, the judge was an elderly gentleman from Lithuania whose family had fled to the U.S. during WWII. He said the US is a country that has seen waves of immigrants, each from different parts of the world, of which have been discriminated against in some form. He said that Americans had made many mistakes over time, but the important thing about out nation is its institutions and its constitution that ultimately give us the ability to change things and to set them right. In this regard it is unparalleled. He pointed to the fact that African Americans were originally brought to America against their will and the Japanese interned, etc. He said we continue to make mistakes, but as citizens we have the right to make our voices heard and to change things. He said that the streets are not paved with gold and that things will be hard for many, but nobody leaves as there is always hope. That for this reason, he said, it remains the best country in the world to call home.
Pretty extraordinary statement, I thought. Not filled with exhortations of exceptionalism or jingoism. Lots of respect for the man.
League of women voters was hard at work at the naturalization ceremony getting everyone to register. They clearly did a great job because I think practically everyone registered! 194 newly registered voters!