The Party of Trump 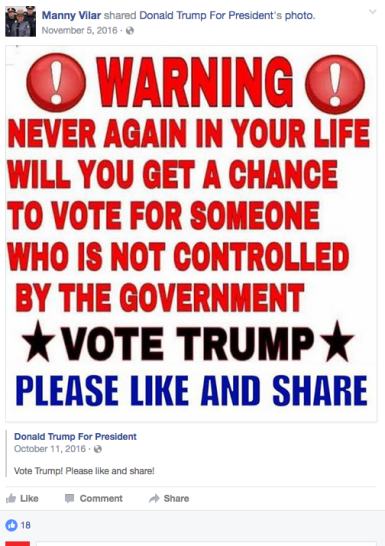 While walking our roads I saw a few election signs. I’m going to speak specifically about the two Republican candidates. Their slogan was something about transparency and putting politics aside for people.

Now to me this seems sarcastic. The Republican Party is the party of Trump. And Trump has revealed very, very clearly what the Republican Party is for. The Republican Party is the champion of misogyny, the hate of brown and black people, the subjugation and punishment of poor people, the outright attack on the sick and disabled, war, complete protection of the top 1 percent who have most of the wealth in the country, the K.K.K. and its splinter groups that are veiled as nationalism, Christianity as interpreted by white men as the only religion that matters, the destruction of public schools, the persecution of L.G.B.Q.T. members of our society, and one other thing — a complete and utter attack and threat to the security and safety of all Americans and our allies.

Look at what is happening in this country, this isn’t greatness. If you believe that this is the way a great leader governs, you need to read European and American history. Search for World War II and its causes: That is very basic and simple. I’m sure I forgot a few things, but these are the issues that pop into my mind when I think of the Republican Party. I’m not a fan and will never vote for a Republican candidate.