We now have a confirmed case admitted at Southampton Hospital.  It is time to reassess.   Although there is but a single patient confirmed on the South Fork of Long Island, suspicion is running high. (update 3/11: 6 cases in Suffolk county including one in the retirement home PECONIC LANDING).  A local physician tells me that patients with potential COVID-19 symptoms are examined in the parking lot, in their cars, by the physician (wearing protective gear).  This is in order to avoid transmission to critical medical staff in the office.  Healthcare professionals are a known risk group for contacting COVID-19. But physicians on the South Fork are still struggling to get testing for their patients.

A few days ago I called the Suffolk County Department of Health to inquire about getting COVID-19 tests done on people that had recently returned from international travel to countries with now well-documented outbreaks.  These persons also had flu-like symptoms.  The county officials thought this did not meet CDC criteria for testing (no high fever and no acute respiratory distress) and they recommended self-isolation.  I know first hand how unreliable self-isolation can be!  A recent news report confirmed my suspicions when a Missouri patient’s family broke quarantine to attend a school dance!

The problems seem to have been threefold — the Centers for Disease Control did not move quickly enough to manufacture test kits at scale (either because of lack of funding or political will) nor did it open up testing options to other institutions that could have worked to develop tests — and because of the limited availability of tests, the CDC rationed how many tests were performed. Those issues were compounded by the initial release of faulty tests by the CDC in early February.

As former U.S. Food and Drug Administration official Scott Gottlieb wrote on Twitter in early February, “Since CDC and FDA haven’t authorized public health or hospital labs to run the tests, right now #CDC is the only place that can.

Also, the CDC has somewhat arbitrary criteria (?) for placing countries on the list of places that will increase your risk of having contracted COVID-19.  Here is a list of countries with documented cases as a percentage of the population size.  Level 3 Travel Health Advisory (CDC) applies only to the top 4 on the list.  Note that  Bahrain with 5.42 documented cases/100,000 inhabitants does not make the list while China with 5.79 does! Neither does Switzerland with 3.96 cases, where many cases have been tourists from its southern neighbor, Italy.

The above graph comes from a local Swiss Newspaper (NZZ) – test your German skills!

By January there was a test available.  It was offered worldwide by Roche, Inc. FOR FREE and to any country in the world!  The US declined the offer.  Read more about these early missteps here. 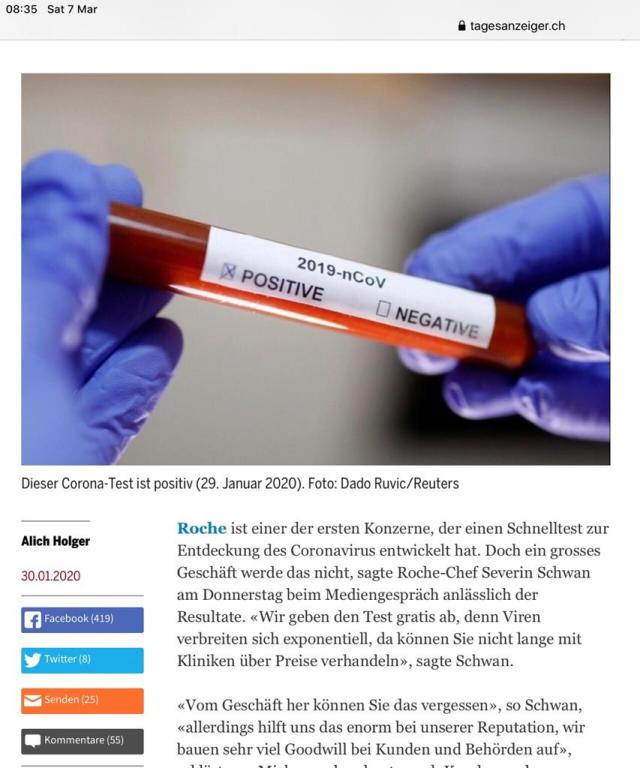 The above report is from a Zurich Newspaper: note the date on the sample is Jan 29th 2020.

Note also, patients that took the test were billed about $200 (SFR 180) for labor of administering the test.  That was their entire cost.

At the time an astute observer commented: “It’s very difficult to understand that countries like the US didn’t seize the opportunity to get the test for free. Perhaps some US companies wanted to make money by developing their own tests?”

Thermo Fisher Scientific corporation provides the COVID-19 test in the US currently. According to the Associated Press, Donald Trump, has listed investments in Thermo Fisher Scientific Corporation (TMO), which moved jobs out of the U.S. in high profile outsourcing deals. Apparently, Donald Trump stands to profit from medical testing of coronavirus that will now take place in the United States.

The response by the administration

The reason that COVID-19 cases are low in the USA is most likely because it has been difficult to get patients tested.

For instance,  a recent CDC conference gave us a glimpse into Trump’s view of the coronavirus as a political rather than health issue.  Trump said he would rather have the passengers of the Grand Princess, a cruise ship docked in San Francisco with 21 confirmed cases on board, stay on the ship than move to land — all because doing so would raise the number of total Covid-19 cases in the US:

“I would rather because I like the numbers being where they are,” Trump said. “I don’t need to have the numbers double because of one ship that wasn’t our fault.”

It is unclear how many people have been infected by the virus due simply to a delay in testing, but it has become increasingly clear in recent days that there are Americans infected with the virus across the country.  It is naive to think that one can suppress the numbers.

Trump fears the fall out on the economy and indirectly on his political chances in November. But his actions are likely to make things worse for himself.

The coronavirus outbreak has U.S. companies starting to shutter offices and send workers home through layoffs, furloughs or directives to telecommute until health risks from the spreading virus recede.  Even if that’s helpful to guard against further spread of the disease, it’s triggering widespread uncertainty and the biggest threat to the labor market since the financial crisis almost a dozen years ago.

The evidence is expected to show up through lost consumer spending.
“If workers can’t work … production and income go down,” Georgetown University economist Harry Holzer said. “That becomes a demand problem if workers lose income and stop spending.”  When that happens, “odds of recession can go way up.”

Eleven states, including California, Massachusetts and New York, require employers to offer workers paid leave, as does the District of Columbia. But none of these jurisdictions explicitly guarantee the benefit to healthy workers on leave because a virus outbreak sent everybody home.

Fourteen Democratic senators last week wrote to leaders of the Business Roundtable, the Chamber of Commerce and the National Association of Manufacturers to urge their member companies not to penalize workers for going home during the outbreak.
Paid sick days are particularly rare for low-income workers. Ninety-three percent of workers in the top tenth of the income distribution get paid sick leave, compared with only 30 percent of those in the bottom tenth, according to the Economic Policy Institute, a left-leaning think tank.

Our Healthcare system can not handle a pandemic efficiently

Finally, let’s consider our health care system and how it is ill-suited to handle a pandemic: America’s Health System Will Likely Make the Coronavirus Outbreak Worse
Out-of-network costs, high deductibles, and confusing coverage options may keep people from getting tested or receiving care (Abigail Abrams)

Deductibles, networks, and a complicated insurance bureaucracy—that already make it tough for many Americans to afford medical care under normal conditions will likely make the outbreak worse.

First, people must actually choose to get tested—a potentially expensive prospect for millions of Americans. While the government will cover the cost of testing for Medicaid and Medicare patients, and for tests administered at federal, state and local public health labs, it’s unclear how much patients will be charged for testing at academic or commercial facilities, or whether those facilities must be in patients’ insurance networks. Just recently, a Miami man received a $3,270.75 bill after going to the hospital feeling sick following a work trip to China. (He tested positive for the seasonal flu, so did not have the new coronavirus, and was sent home to recover.)

Those who test positive for COVID-19 possibly face an even more financially harrowing path forward. Seeking out appropriate medical care or submitting to quarantines—critical in preventing the virus from spreading further—both come with potentially astronomical price tags in the U.S. Last month, a Pennsylvania man received $3,918 in bills after being released from a mandatory U.S. government quarantine after he and his daughter were evacuated from China. (Both the Miami and Pennsylvania patients saw their bills decrease after journalists reported on them, but they still owe thousands.)

In 2019, 82% of workers with health insurance through their employer had an annual deductible, up from 63% a decade ago, according to a report from the Kaiser Family Foundation. The average deductible for a single person with employer insurance has increased from $533 in 2009 to $1,396 last year.  The timing of the new coronavirus at the beginning of the year makes the outlook even worse: because most deductibles reset each January, millions of Americans will be paying thousands out of pocket before their insurance companies pay a cent.

Many patients may simply decide not to go to the doctor, which is “exactly the opposite of what we want to happen in this type of situation.”

A large group of health, law and other experts released a letter this week urging policymakers to “ensure comprehensive and affordable access to testing, including for the uninsured.”

The Trump Administration is considering using a national disaster recovery program to reimburse hospitals and doctors for treating uninsured COVID-19 patients. And even Republicans, who have traditionally opposed health care paid for by the government, are warming to the idea. “You can look at it as socialized medicine,” Florida Rep. Ted Yoho, who has vocally opposed the Affordable Care Act, told HuffPost this week. “But in the face of an outbreak, a pandemic, what’s your options?”