Across the globe there has been a sweep by nationalistic, right-wing and even far-right movements large enough to win elections, and form governments: Jair Bolsonaro in Brasil, Viktor Orbán in Hungary, Matteo Salvini in Italy, Andrzej Duda in Poland, Erdogan in Turkey, Boris Johnson (the Brexiteer) in the UK, Donald Trump in the USA, etc.

As of 2017 the rise in the percentage of voters supporting these authoritarians seemed inexorable: https://qz.com/1027518/populist-authoritarian-leaders-are-still-on-the-rise-across-europe/

I have Swiss roots.  So I am naturally interested in electoral results from ‘back home’. Switzerland also has its xenophobic nationalistic party: the Swiss People’s Party (Volks Partei; SVP). Under Christophe Blocher the party gained popularity and now has 65/200 seats in the national council and is the largest party.

However, election results from this week indicate a major change:

The historic gains made by the left-wing Greens exceeded expectations, turning the 2019 elections into a bellwether moment on climate change and environmental issues. The Greens gained 17 seats, overtaking the Christian Democrats, to become the fourth-largest party in parliament. This was the largest leap by a political party in Swiss politics since 1919. The centrist Liberal Greens gained nine seats.  https://www.swissinfo.ch/eng/switzerland-election–2019-results-maps/45312474

I clearly needed a primer on the many Swiss political parties:

SP: is the Socialist Party or Social Democrats. (They lost)

SVP: is the right-wing Swiss Volks Partei.  (They lost big)
Here are some maps.  The arrowheads pointing down represent a loss of votes.  Those pointing up represent votes gained. 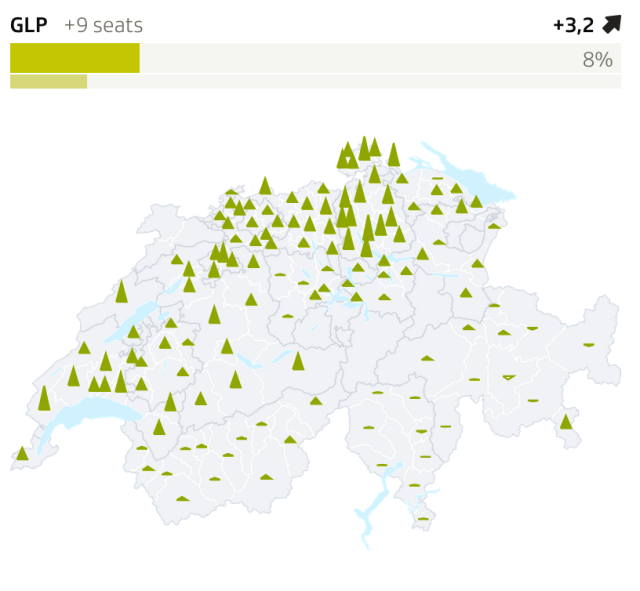 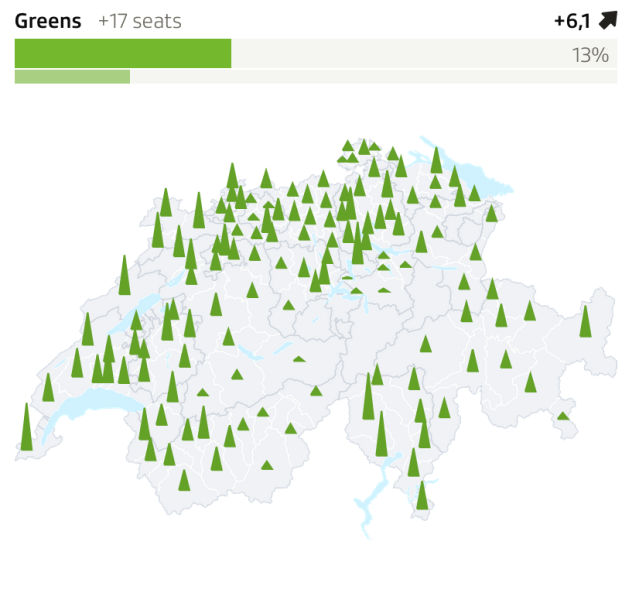 Is this the first election result from Europe showing a major left-ward shift and green shift?  Possibly suggesting that voters are turning away from the far-right, populist and authoritarian politicians? As such it merits widespread attention.

Both Boris Johnson and Donald Trump are currently dealing with push back.  And Greta Thunberg seems to be on fire. I wonder whether there is a theme here.

As reported by John Hooker in Switzerland:

The recent federal elections held in Switzerland last Sunday show that the Swiss are on the move! The average age of the elected officials is 49 and the representation by women has increased to 42%.  And the young are demonstrating in the streets to demand that environmental studies be mandatory in all universities…!

4 Responses to Green Tsunami in Switzerland!