The Children in the Camps 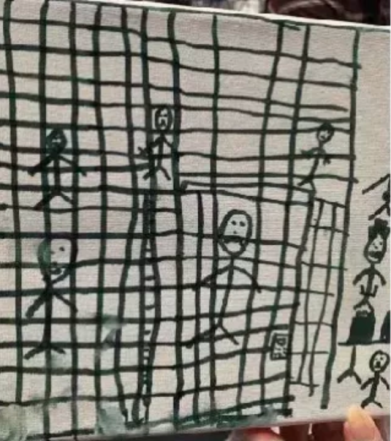 Picture drawn by child in our border camps.

I am haunted every day by the images of children in the camps. I am haunted by the pictures they draw, which bear a frightening resemblance to those in the book, “I Never Saw Another Butterfly”, drawn by the 15,000 children who were imprisoned in Terezin before dying at Auschwitz.

Mostly, I’m haunted as I go through the tasks of everyday life with my own children. As I put lotion on my son’s mosquito bites, as I go and lay down with my daughter when she wakes up from a nightmare. As I take them to  swim lessons, to play dates, as they play on the street. I’m haunted by the normalcy of our lives in these abnormal times, where #NeverAgain is now.

My mind is constantly in conflict. On the outside, I am trying to give my children the life they and all children deserve, one where they feel loved, secure, and joyful. When they cry, I hold them. When they want to talk about their feelings, I listen. When they want me to notice what they’re doing, I enthusiastically cheer them on. It’s what parents do. And as I do it, I think about those kids in the camps. Those kids who haven’t had a shower, a change of clothes, a warm blanket, a hug, an adult to care for them. And as I look at my own children, I am haunted. There are tears in my eyes as I hug them, listen to them, put band aids on their scrapes, because I know that this crime against humanity is happening in my country, and here I am, relatively unscathed, privileged.

I don’t know how we end this madness. I write, I call, I protest, I donate, I organize, I vote. It doesn’t feel like enough. It’s not enough. I think we need sustained collective outrage, the kind that ended the Vietnam War, the kind that happened during the Civil Rights Movement. Those families deserve our collective outrage. Our democratic experiment requires that outrage. It’s failing, and I think we are failing it.

I think this will only end when each of us who still has a conscience that transcends our political affiliations tunes in to that twinge  we’re feeling when we see those pictures. Too often, we push those feelings down, shove the discomfort away to focus on what’s in front of us. Don’t ignore the twinge. Don’t look away. Be haunted. That’s your humanity speaking to you. It’s asking you to care and to act. Because #NeverAgain is now.

2 Responses to The Children in the Camps