Panic or Empowerment? Brought to You by Greta, Alexandria, 1.6M+ 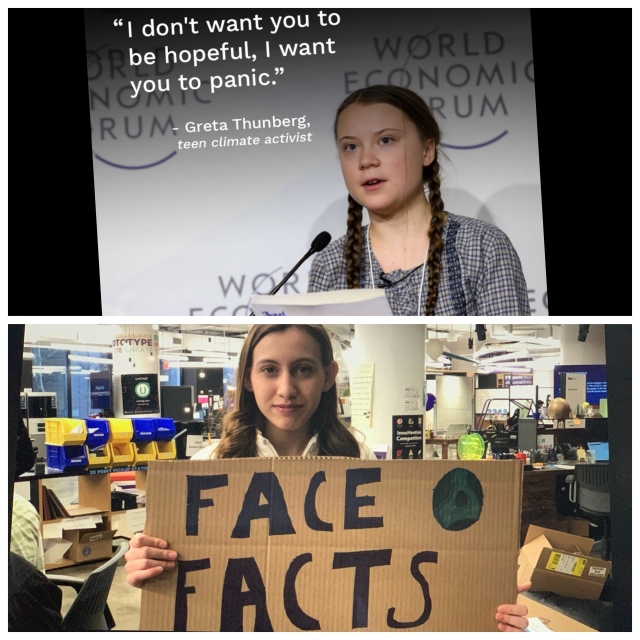 Feeling inspired?  I am.

Thrilled, actually, to witness the clear clarion call to climate action….. by young people who have their whole lives to live, and so much to loose.

UNITE BEHIND THE SCIENCE, THAT IS OUR DEMAND

As stated by Greta Thunberg, who, at 15, started striking from school on Fridays for climate action, in front of the Swedish parliament, September 2018.

Signs by Alexandria Villaseñor, 13, who began her own one-student protest in front of the United Nations, December 2018.

Horrified by the smothering smoke and raging California fires last summer, Alexandria was channeled into action by Greta’s December You are Stealing our Future speech at the UN Climate Conference in Poland (COP24), and her subsequent interview: I am too young to vote.…But I can sit down with a sign and make my voice heard.  Greta, deeply depressed after learning of the looming 6th great extinction and climate change was, herself, motivated by students from Parkland, Florida, striking from school to call attention to common-sense gun-control legislation.

Now 16, Greta has been nominated for a Nobel Peace Prize, and is featured in TIME (by Parkland’s Emma Gonzalez, no less) as one of the 100 most influential people of 2019.

Alexandria, noticed by the media this past February, was asked to speak at the UN.  You can see the focus in this young lady through profiles in Teen Vogue, The Washington Post, CBS News.

She has joined forces with three other young women co-founding  US Youth Climate Strike, penning an article in the Bulletin of the Atomic Scientists entitled Adults won’t take climate change seriously. So we, the youth, are forced to strike by Maddy Fernands, Isra Hirsi, Haven Coleman, Alexandria Villaseñor,

On a recent Friday I met Alexandria, camped out on “her bench” at the UN.   My friend Dorothy Reilly, founder of Southampton-based Drawdown East End, encouraged me to join her in a show of support.  So I trekked from Orient with my message-sign and chatted with Alexandria’s mother, Kristin Hogue, a graduate student in the Climate and Society program at Columbia University, and two visiting teachers from England and Germany, while Rolling Stone interviewed the lone school-striker.  Late in the afternoon we were joined by 6 teens from the Institute for Collaborative Education, each with a message on a hand-painted sign.

I found their passion and positivity heartening.

In the focus, bravery and determination of these young women I see leadership. By taking a stand, by putting something they value on the line —their education—  by using their voice, connecting though social media, they have helped push climate change into the forefront of the national conversation.

Don’t you think it is inspiring to see these young women, teens, girls, acting so empowered?  Not victims.  They just cut through all the gas-lighting by the self-dealing troika:  big oil, big money, big power.

They see through the lies, excuses and information-withholding and, instead, substantiate reality with facts.  Alexandria is taking personal action, like recycling and eating less red meat.  She also says there needs to be a systemic change, as she told a reporter:  It does come to the point where I do realize that 70 percent of greenhouse gas emissions come from 100 companies all around the world, and so that’s why you need more governmental action to combat climate change.

They call attention to the silence, the delay, the pretend ignorance.    Greta’s now famous:

GROWNUPS HAVE FAILED US

YOU ARE STEALING OUR FUTURE

OUR HOUSE IS ON FIRE

They bring up the on-going denial of the consequences of global warming, meant to keep us confused, off focus. Greta talks about the 6th great extinction.  She reminds us:

They speak up about the obvious.  Greta:  Treat climate change as a crisis. Do something about it. Change your own habits and put pressure on people in power.  Start living within planetary boundaries.

They point out the failure of leaders entrusted to meet agreed upon targets and the inadequacy of the agreements themselves.   Alexandria’s poster:

They call out the guilt trip of you should .…be in school .…let adults handle this .…etc., etc. Greta:  Some people say I should be in school instead; some people say that I should study to become a climate scientist so that I can ‘solve’ the climate crisis, but the climate crisis has already been solved. We already have all the facts and solutions. And why should I be studying for a future that soon may be no more, when no one is doing anything to save that future?

Millions of students around the world are joining Fridays For Future.  They are showing us they have healthy boundaries.  They can say NO.   No, I will no longer pretend.  No — I will sacrifice my education to sit at a government building to pressure officials to act and meet the Paris Climate agreement goals.

And, what stabbed at my heart:  No, you will not put this on my generation to solve.

They empower themselves and students world-wide by stating their feelings, I want you to feel my panic, by facing the problem, face facts, by focusing on mutual interests, I’m fighting for OUR future, by insisting on objective criteria, listen to the scientists.

I’m inspired.  This is what empowerment looks like.  Empowered young women. Wow.

How to support them?

VOTE.  We voters can vote.  We can encourage those who are 16 (who turned 16 by November 3, 2018 and will be 18 by November 3, 2020) to register to vote. PLEDGE TO VOTE encourages high school peer-to-peer voter registration.

VOICE.  We can voice our support of #FridaysForFuture, #ClimateStrike, #ClimateCrisis with friends, letters to the editor, joining in.  We can follow #GretaThunberg, #AlexandriaVillaseñor and others, and get involved in the social discussion.  We can talk about climate change, the climate crisis, and solutions.

VISION.  We can empower ourselves with a positive vision for the future, and enact solutions.  We have just eleven years to reduce GHGs — greenhouse gas emissions — by 40%.  There are solutions that involve personal choice, community action, and local/state/national policy that avoid carbon emissions and multiply carbon sequestration.  There are solutions.  That is why I’m excited about helping start Drawdown East End at the Southampton Library.  Our mission statement, still in formation, is something like this: Inspiring, initiating and advancing local solutions from Drawdown: 100 solutions to reverse global warming, that bring about cascading economic, health and security benefits.

Our steering committee is meeting every Monday morning at the Rogers Memorial Library.  Soon we will have a program in place for the public to drop in, learn and take action.   Meanwhile, you can check out Paul Hawken’s inspiring, meticulously researched compendium Drawdown mapping the best practices and technologies already working to roll back global greenhouse gas emissions within 30 years.

On Friday May 24 you can join us as we stand in front of Southampton Town Hall in solidarity with #FridaysForFuture and the millions of young people world-wide who are sacrificing their education to pressure town, state, national and international elected-officials to change our policies to meet the Paris Climate agreement goals ie. no more than 1.5*C (2.7*F) increase in global temperature, which would start to bring our polluted atmosphere back to healthy, balanced below 300ppm levels, as it was in the 1960s.

We support students striking privately at home, in front of government buildings, joining a #FridaysForFuture rally and, as the student-leaders themselves advocate:  Strike at school on a Friday.  Don’t skip class.  Ask teachers and principals to dedicate part of the day to the strike on a Friday to learn or do something about climate change.

I think it’s only fair that we pass along to the 15 year olds of today a world with the carbon content we breathed at their age.  Don’t you?  For me that was about 315ppm.

Co-founder, Drawdown East End (DrawdownEastEnd.org), a grass roots group with a mission to inspire our community to actively engage in solutions that reduce greenhouse gases and achieve drawdown. Formerly executive director of the Guggenheim Learning Through Art program in New York, Mary moved from art to science -- working with the Cornell Marine Program on the North Fork helping to launch a community-based aquaculture training and restoration effort (SPAT), and to local food -- helping launch Slow Food East End. Mary has deep roots in the East End, for generations her family lived and farmed in East Hampton. She currently lives in Orient.
View all posts by Mary Foster Morgan →
This entry was posted in Air Pollution, climate change, Environment, Paris Climate Accord, Women and tagged Drawdown, Greta Thunberg, student strike for climate. Bookmark the permalink.

2 Responses to Panic or Empowerment? Brought to You by Greta, Alexandria, 1.6M+