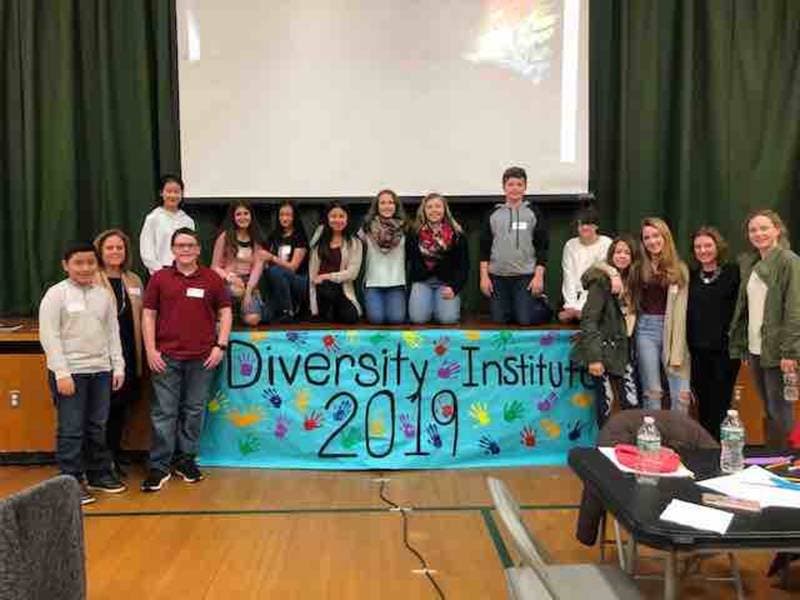 MATTITUCK, NY — A school district that has pledged to take a strong stand in the fight against anti-Semitism welcomed a Holocaust survivor to speak to students.

As part of the district’s ongoing efforts to expand students’ awareness of cultural diversity and the importance of acceptance and inclusion, students from Mattituck Jr./Sr. High School participated in the Springs School Cultural Diversity Institute.

Students had the opportunity to deepen their understanding of cultural diversity and to engage in a meaningful dialogue on the negative impact of bias, prejudice, discrimination and stereotyping with a diverse group of community members, the district said.

Holocaust survivor Judy Sleed, who lives in East Hampton, shared the “moving and memorable” story of her past and encouraged the students to be accepting of all cultures in schools, the community and the world. Sleed lived under German occupation in Budapest, Hungary, in March, 1944, with the worst of her ordeal taking place on Oct. 20 to 24, 1944, she has said.

Mattituck Junior-Senior High School Principal Shawn Petretti sent a letter home to parents in January discussing concerns over “several incidents that have occurred this year in regards to individual students joking about their support and admiration of Nazism and Adolf Hitler.”

There have also been incidents involving “language and acts” associated with anti-Semitism, he said, which have taken place primarily in the 7th to 10th grade population.

“We take all of these situations very seriously and have handled them as acts of bias, resulting in a combination of discipline and counseling,” he said.

With an eye toward proactive solutions, the Mattituck-Cutchogue Union Free School District has also invited the Holocaust Memorial and Education Center of Glen Cove to come to Mattituck High School later in the month to speak to students, Petretti said.

He added that he would begin immediately to have grade-level discussions with students to discuss the “impact and severity of any acts of bias” and said that any such future acts would be dealt with swiftly and in compliance with school code.

“As educators, when we see trends in negative behaviors and habits, we look to find the cause as a means of addressing the issue,” Petretti said. “One of the things we have discovered is that the recent increase in incidents of anti-Semitism is not isolated to Mattituck but is happening in junior and senior high schools across New York. Another thing we have discovered is that an app, very popular with adolescents, called TikTok, is littered with videos containing messages of pro-Nazism as well as anti-Semitism. Much of the content is targeted to children and teens and is delivered through comedic videos clearly sending the wrong message to our children,” Petretti said.

Petretti asked parents to speak to their children and explain the “harmful impact and severity of words,” so that they and the district can work together to put an end to the behavior and ensure the Mattituck Junior-Senior High School is a respectful and safe environment.

Parent Lauren Gilbert said she was happy that parents had been notified. “I think that this generation is highly unaware of the severity of these things. Whether they are learning it at home or from some social media app, I don’t believe for a second that in 2019 our middle and high school students are making foul remarks about the Holocaust and supporting Hitler while also knowing all the facts, as well as being aware of what their words and actions have the power of doing,” she said. “It’s extremely unfortunate to see some students take such a large step back in time. I hope that the disciplinary actions as well as counseling and educational actions the school is taking will have a lasting impact on the ones who need to hear it most.”

Sonia Spar, co-chair of the Southold Town Anti-Bias Task Force, said she feel it is troubling to see that disseminating hate has increasingly become mainstream and school children are using hateful and bigoted language.

“It is very important that school officials are clearly stepping up to denounce the hateful message, are bringing this situation to the attention to the entire school community and are sending the clear message that this kind of rhetoric and behavior is totally unacceptable,” Spar said. “Education and leadership are our best hope for eliminating hate. The rise in hate and anti-Semitism across New York State and in the country is of great concern. We — as a community — must do all we can to prevent that this kind of hateful language becomes normalized.”

Spar added that the ABTF, together with Greenport, Southold and Mattituck schools are coordinating a cross district peer to peer leadership anti-bias in-depth training for students in grades 7 to 11. “We believe this is a very important effort,” she said.

It’s not the first time schools on the East End have had to face anti-Semitism in recent months: In April, anti-Semitic graffiti was spray painted at Westhampton Beach High School.

A company spokesman for TikTok responded: “Hate speech is not permitted on TikTok. We make this very clear in our Terms of Service and Community Guidelines, and we remove inappropriate content and terminate accounts that violate our policies. We are committed to promoting a safe and positive app environment for our global community and there is absolutely no place for discrimination, including hate speech, on this platform. For more, please visit our Safety Center.”