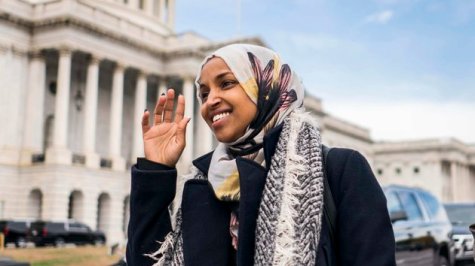 Rep. Ilhan Omar’s opponents have looked for every opportunity to portray the Somali-born Muslim lawmaker as a threat to Jewish Americans. (Yahoo Magazines PYC)

As Long Islanders, as neighbors and allies of the Muslim community, we stand in direct opposition to the hateful and dehumanizing statements of Representative Lee Zeldin. Rep. Zeldin’s rhetoric and bullying of MN Representative Omar on his official government Twitter account was abhorrent. Rep. Zeldin has long touted his bipartisanship and zeal in being an ethical elected official, but these remarks are neither bipartisan nor ethical.  Mr. Zeldin represents a diverse, multinational district, as well as the regional interests of all Long Island residents in Congress. However, his comments represent the worst divisions of our country. We would like to remind him that as the elected representative of Americans from Minnesota she deserves his full respect and courtesy, as does every Muslim in his own Congressional District. We demand that he end the use of this official social media platform to spew hatred, racism, and sexism.

The agreement to have a meeting will only be successful if Rep. Zeldin apologizes for his disrespectful and dehumanizing behavior and is willing to discuss the ending of all hatred and discrimination. He should agree to not limit his Resolution 72 to only anti-Israel and anti-semitism, but to include hatred against all religions, races, and genders.

In addition, we are calling on our elected officials on both sides of the aisle to denounce this public attack on his colleague. We ask that they join us in calling for Rep. Zeldin to apologize. We ask for every elected official to stand up for civil discourse and demand respect for the office and people Rep Omar serves.

United Grassroots Coalition of Long Island is a coalition of activist groups based on Long Island working towards creating a more just society by increasing civic engagement with government and politics.

Together We Will LI