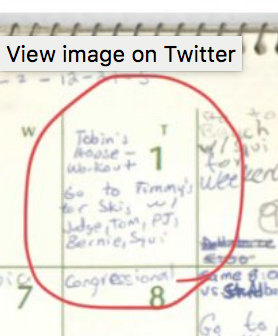 (Provided by Brett Kavanaugh to the Senate Judiciary Committee)

During Thursday’s dramatic questioning of Supreme Court nominee Brett Kavanaugh, he was quizzed repeatedly about the calendars he provided to bolster his case that he didn’t assault Christine Blasey Ford while a high school student in 1982.

Ford alleges that she attended a party at someone’s home that summer, where, she alleges, Kavanaugh and his friend Mark Judge pushed her into a bedroom and locked the door and where Kavanaugh then began to try to remove her clothes. Among the others at the party, Ford alleged, was another friend of Kavanaugh’s named P.J. Smyth. Kavanaugh denies the allegation and told Fox News’ Marth MacCallum that while he might have met Ford, he didn’t know her. Judge said in a statement that he doesn’t remember any such party. Smyth made a similar statement.

It was Kavanaugh’s hope that providing those calendars would show that he attended no such gathering. He insisted, in his testimony Thursday, that any party of the sort must have been on a weekend (since he and his friends had jobs) and that the calendars showed that essentially all of the weekends were booked with other activities. (His friend Mark Judge, in a memoir about his past drinking problem, wrote that this wasn’t a concern of his: He’d regularly show up at work hung over or drunk.)

Rachel Mitchell, hired by the Republican majority of the Senate Judiciary Committee to navigate the questioning of Kavanaugh and Ford, pointed to one particular calendar entry that got some attention after the calendars came out. It read:

The reference to “skis” is apparently to “brewskis,” or beers. The entry was July 1, a Thursday. Mitchell asked him about it.

MITCHELL: The entry says, and I quote, go to ‘Timmy’s for skis with Judge, Tom, P.J. Bernie and … Squi?’

MITCHELL: To what does this refer, and to whom?

KAVANAUGH: [after explaining the “Tobin’s House” part] It looks like we went over to Timmy’s. You want to know their last names, too? I’m happy to do it.

MITCHELL:If you could just identify: Is ‘Judge’ Mark Judge?

Notice two things here. First, that “Squi” was in attendance at the party — someone who, we learned thanks to Mitchell’s questioning of Ford, was going out with Ford over the course of that summer. Second, notice those two other attendees, one of whom Mitchell highlighted: Mark Judge and P.J. Smyth.

KAVANAUGH: Yes, it certainly appears that way, that’s what I was doing in the summer of 1982. You can see that reflected on several of the– several of the entries.

MITCHELL: If a gathering like Dr. Ford has described had occurred, would you have documented that?

During her testimony, Ford made clear that the event at which she says she was assaulted was a casual get-together before the others (who were older than her and had a later curfew) went to other, bigger parties. Kavanaugh says that the gathering at Timmy’s on July 1 was essentially that.

We noted Thursday, too, that the time frame of this July 1 party fits with Ford’s testimony. She says that six to eight weeks after the alleged assault, she saw Judge working at a store in the area. Judge’s book indicates that he was working at that store for several weeks in early to mid-August.

This is a central point to Ford’s allegation. Kavanaugh denies knowing her, denies being at a party with her. Here is an event in July where he was with several long-standing friends, two of whom were named by Ford and one of whom she’d been going out with.

But Mitchell’s next question completely fumbles the point.

MITCHELL:Have you reviewed every entry that is in these calendars of May, June, July and August of 1982.

MITCHELL:Is there anything that could even remotely fit what we’re talking about in terms of Dr. Ford’s allegations?

That was it. Mitchell changed the subject.

There were all sorts of ways that Mitchell could have pressed the issue. How, for example, might Ford have been able to identify by name two of Kavanaugh’s close friends if she didn’t know him or had barely met him? Why isn’t it possible that this July 1 get-together was precisely the sort of event at which Ford alleges she was assaulted? That more than remotely fits the allegation? But she didn’t ask.

Mitchell had been stepping in for Republican senators during the day’s questioning, a tactic that helped the majority avoid the spectacle of men grilling a woman about an attack she says she experienced. There was no break in that pattern — until the July 1 question. After that series of questions, Mitchell didn’t speak again.

Update: On Friday morning, Sen. Sheldon Whitehouse (D-R.I.) outlined the points above. Sen. Charles Grassley (R-Iowa), the chairman of the committee, responded by noting that the calendar indicates that there were at least seven boys at the party, while Ford’s allegations only mentioned four.

Ford addressed the number of attendees during her testimony on Thursday, also responding to a question from Mitchell.

“I can’t guarantee that there weren’t a few other people there,” Ford said, “but they are not in my purview of my memory.”

Comment (D. Posnett):  It is interesting. to see what our congressman, Lee Zeldin, thinks of Brett Kavenaugh.  Thanks to David Friedman for this:

Not an “Activist Justice”? Really?  Let’s call BS when we see it. Kavenaugh has been a political operative or “hack” all along starting with this work for Ken Starr.
https://www.washingtonpost.com/politics/2018/09/27/brett-kavanaugh-just-got-remarkably-angry-political-supreme-court-nominee/?utm_term=.59a1b06a39a8