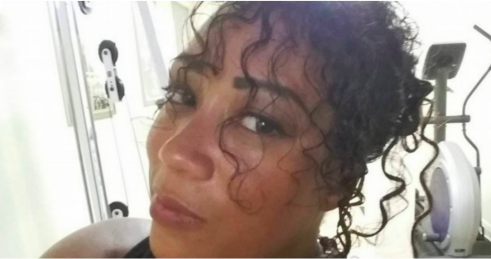 By Yvette Montoya June 13, 2018, as published in Hiplatina.com

When Tiana Smalls (pictured above) boarded a Greyhound Bus in Bakersfield California headed to Las Vegas, she found herself in a situation that is reminiscent of Nazi, Germany. She recounts her experience in a Facebook post that has now gone viral: 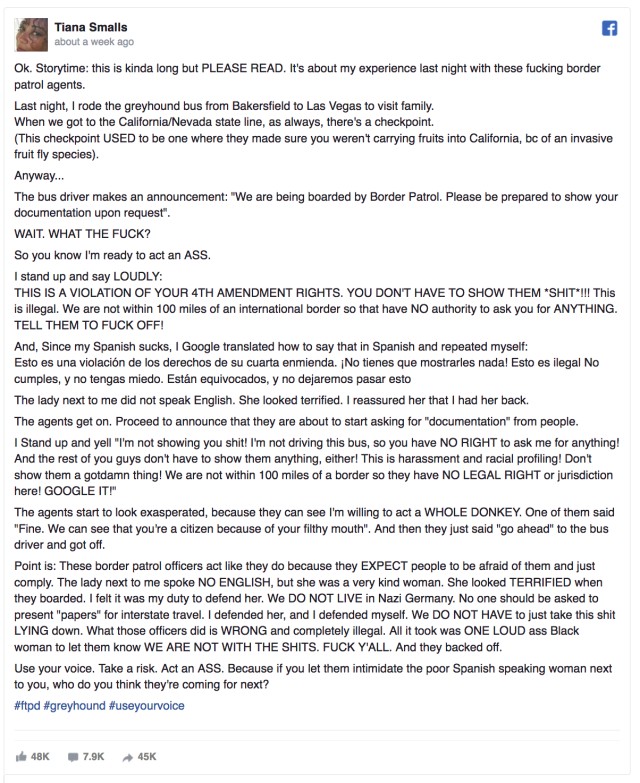 Tiana decided to act when she could have just minded her business and continued her trip. But no, what happened was bold and brave:
Realizing that the people most likely to be targeted by ICE are Latinos, Smalls got on Google Translate so she could read her message in Spanish to make sure everyone knew what their rights were. She even went as far as reassuring the terrified woman next to her, that she wouldn’t let anything happen to her.
When ICE boarded the bus, Smalls was loud, stood her ground and made sure the agents, the driver, and everyone on the bus knew, that what ICE was doing, was illegal.
Small’s “filthy mouth” saved lives. She stuck up for what was right and for those who were most vulnerable. And she reminds everyone that injustice exists because of fear and silence and that using your voice to defend those in danger is the only way to combat the racism and blatant xenophobia sweeping the United States.
But what I really want to know is why Greyhound is allowing paying customers to be arrested simply for existing?
Yvette Montoya
There are many comments all over Facebook on this story.  Here is one that needs to be answered (spelling errors corrected):
What Uri Xeno misses, is the intent and motivation behind Trump’s minions.  Uri is correct in stating that other countries might well enforce their laws against people that overstay their visas or break immigration laws.  However,
1) other countries do not have a stated policy to hunt down their own citizens who might stand accused of having obtained citizenship by illegal means, i.e. operation Janus, and ending birthright citizenship.
2) other countries don’t declare that people from “shithole” countries are not welcome.
3) other countries don’t leave entire segments of their own citizenry (Puerto Ricans) in limbo regarding their rights.
4) other countries don’t appoint racists to positions in government which empower ICE and other agencies and enact racist policies (Carl Higbie, Ayo Kimathi, Steve Bannon, Stephen Miller, Jeff Sessions, John Kelley, Thomas Homan, Sheriff Arpaio,etc).  This was clear from the onset of the Trump presidency.
5) other countries don’t appoint ambassadors to raise hell with our staunchest allies.
6) other countries do not systematically turn down those that seek asylum because where they came from, they were in danger of their lives.
7) other countries don’t separate mothers from their children when they are apprehended at the border, which has rightfully spawned massive protests,
8) and most other countries don’t have an avowed racist as their president
Those are fascist tactics as Dr. Ruth explained to Dr. Kissinger!  And our country will suffer the consequences.  The historical record will not be kind.

In regard to our own US history, we just saw a new play “FELLOW TRAVELERS.”  It is set during Hollywood’s notorious Blacklist.  FELLOW TRAVELERS examines the relationship between legendary theater artists Arthur Miller and Elia Kazan and their close connection to Marilyn Monroe.

As per the patch.com it is a story of one of Hollywood’s darkest hours…, when American entertainment professionals and intellectuals were interrogated and denied employment opportunities because they were suspected of having Communist ties, or simply because they refused to cooperate with the McCarthyism witch-hunt. During this poisonous political time “Fellow Travelers” was the derogatory term used for people who were suspected of having any kind of Communist affiliation.

I also highly recommend “Red Hollywood”, a movie that

mainly features clips of films made by “Communist” writers, directors, and actors in Hollywood, many of whom were targets of secret government investigations and were blacklisted—barred from working in the studios in the wake of the hearings held, in 1947 and 1951, by the House Un-American Activities Committee (HUAAC). Read more here.

What stands out is the creeping nature of persecution:

First they came for the Socialists, and I did not speak out—
Because I was not a Socialist.

Then they came for the Jews, and I did not speak out—
Because I was not a Jew.

Then they came for me—and there was no one left to speak for me.

Uri Xeno beware!  They may come after you!