A Mom Speaks Out: Wake up America, we are at War! 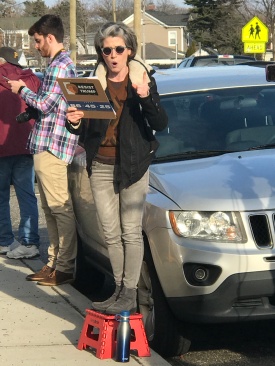 Thank you for being here. I’m Mara. I’m a mom, a lifelong New Yorker, and a constituent of Lee Zeldin. And I’m here to tell my representative, and everyone who will listen, that as of this week, I am a single issue voter.

I only vote for people who will take basic steps to protect me and my family from preventable threats – both foreign and domestic. I am here to tell Rep Zeldin that if he cannot fight for the most basic measures to keep our children safe from gun violence. If he cannot fight for our country to defend itself from information and cyber warfare, then he is worse than useless to any of us.

Trump and Rep Zeldin and so many men like them run on “law and order”, borders, “security”, building up our military, “keeping us safe”. And here we are: 100 of us dying daily from gun violence, another day, another school shooting. Another 15, 20, 50 young lives lost. There is not a parent in this country who wasn’t afraid to send their children to school this week. There wasn’t a kid over the age of 5 in America who didn’t sit in their
classrooms this week afraid that maybe they were next. What is this? Why do we have to live like this? When the majority of Americans are desperate for sensible gun safety laws, why is Lee Zeldin actively working hard to make gun laws more lax?

At what point does this failure to address gun violence become a dereliction of his basic duty to protect us? At what point? A long time ago!

We have a couple of brilliant people who will talk more about our so-called “moderate” congressman’s voting record on gun safety so we can all understand why the NRA loves Zeldin so much.  But I want to talk about one specific bill, voted on and passed by the House of Representatives in December. H.R. 38/ Senate Bill 446, the so called “concealed carry reciprocity” bill. It means that states with the weakest requirements for allowing people to carry concealed, loaded guns in their communities will set the national standard. So whereas now states are free to decide what gun laws will keep their communities safe, and can then enter into agreements with other states to honor out of state gun laws. Concealed Carry would mean that all states would be forced to accept the lowest gun safety standards in the country. And no one is talking about it.

It is time that we understand – and make sure everyone we know understands – what HR 38 / Senate Bill 446 – Concealed Carry will mean for New York.

NY awards concealed carry permission only to citizens with justifiable need who are not a danger to themselves or others, and can demonstrate a high level of knowledge of firearm use and safety. Our laws recognize and protect us from the potential threat of dangerous and violent people carrying concealed guns. This is one reason why NY has such a low incidence of gun deaths and injuries per capita. If the NRA – with the tens of millions of dollars they have spent to do so — succeeds in getting the Senate to pass Zeldin’s Concealed Carry Bill it would put domestic abusers and people convicted of violent crimes with hidden weapons on the streets of our towns — Patchogue, Bellport, Montauk, Smithtown, etc. I want Zeldin to tell me how this will make it more safe for me and my child to walk those streets, to go to school, to go to work. Tell me how!

And when you tell me, I will tell you this. You are lying to our faces. More guns, more concealed weapons, and looser gun laws will not make us safer. Until you stop serving the NRA over your constituents, until you stop selling our children’s lives to gun manufacturers, we are all single issue voters. And I ask all of you to tell everyone you know, about what HR 38 / Senate Bill 446 – Concealed Carry will do to NY and why it is
keeping you up at night. Here’s what else is keeping me up at night! We learned this week that there is incontrovertible evidence that the US is under attack from a foreign adversary. What most defense experts are calling the worst attack on our country since 9/11.

We know that Russia penetrated the systems of our major political parties, tampered with our voting machines, discouraged voting with fake information and media campaigns built on lies, that they rounded up support for Trump and are sowing disinformation and confusion about the harm he is inflicting upon us every day. We know that Russia helped sway public opinion to push Al Franken out of office. That they are acting to control social discourse after the Parkland shooting last week. America
needs to wake up. We are at war.

And the president said nothing. He attacks the FBI and goes golfing. He spends NO TIME thinking about how to protect us from the very real threat that Russia will decide in 2018, who runs our government. Russia, is clearly exercising control over the people they have handpicked for the job. Why are Trump and Zeldin doing nothing? Why won’t Trump institute sanctions (H.R. 3364) that were passed by a huge margin 419-3 in the House?

Why is that ok with Zeldin? Is it because the GOP & Zeldin know that they can only stay in power with Russia’s help? Well I’m sorry. That’s too bad. If you can only keep your jobs with Russian help, you’re out. This is OUR country. Not Russia’s.

The people in Washington running the Republican party are dirty. They give tax cuts to the rich and spend millions of dollars to fly first class, and in the same breath take away veterans healthcare, children’s healthcare, food for the poor. They are dirty and corrupt from the inside out. Lying to the FBI, money laundering, tax evasion, defrauding consumers, bank fraud, exploiting their office for personal gain.

Before we even get to collusion with a foreign adversary, if even half of the things these people are accused of are true, Republican leadership in Washington should be in jail. And if they were black they would be.

Every day in this country feels more and more like a national version of the godfather.  Here’s what we know. 130 white house staff didn’t have security clearance as of Nov of 2017. The people with the highest levels of security access in the country, have been deemed by our FBI to be unfit for that access. Unfit means that – for whatever reason – be it domestic abuse or foreign debts or lying repeatedly on disclosure forms – our top law enforcement has said that giving these people access puts our lives in danger.

This is not hyberbole. Our government is burning. It is being run by people who are beholden, literally, financially and probably more, to a foreign adversary, and special interests, like the NRA, that is controlled by companies who sell guns and, it turns out, has its own ties to Russia.

What has happened, and is happening, in our government is so insane that we can’t admit it. Because no one knows what to do in the face of this all being true.

What does Donald Trump do? He goes golfing. And what does Lee Zeldin do? He defends him. And worse. Zeldin is actively working to derail the Russia investigation and to attack people who have devoted their lives to protecting our country. A proud member of Devin Nunes #CoverUpCaucus, Zeldin is doing far worse than nothing. Just this morning on Twitter, Zeldin continues his constant and desperate scramble to undermine the efforts of those who are trying to understand what happened and protect us from attack.

And all of these people – Trump, Zeldin, Devin Nunes – every person who holds elected office – has taken an oath to “protect and defend our constitution.” And they won’t even try. A basic dereliction of duty to perform their basic oath of office.

3 Responses to A Mom Speaks Out: Wake up America, we are at War!