Posted on January 2, 2018 by maidstonejewelry

I have previously posted on the “Trump Slump” in tourism. And here, and here too.  But it is time to reexamine the issue because the data over one solid year indicate that the slump is here to stay!   How will this affect us locally?  TBD. 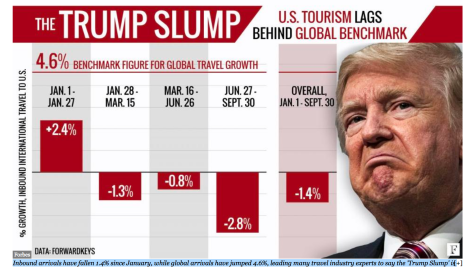 After the announcement of the first two travel bans in January and March, the number of international travelers arriving in the U.S. has dramatically dropped, according to ForwardKeys, a European travel-prediction firm.

Experts expected to see falling arrivals following the first executive announcement in January, when European interest in visiting the U.S. fell 12%  but to see the number of arrivals impacted so quickly is startling.

“The confusing and convoluted travel bans have done nothing but worsen the country’s reputation around the world,” said Lee Abbamonte, an American travel expert who has been to every country in the world, in an email. Although he believes there should be a vetting process, he says that as it stands now, it is too stringent, and confusing for many international citizens.

A small percentage drop in arrivals is no small potatoes when translated into a dollar amount. In 2016, the U.S. travel and tourism industry generated over $1.5 trillion in economic output, supporting 7.6 million jobs, according to SelectUSA, an international trade analyst firm. That represents 2.7% of overall GDP.

“I’m not surprised inbound travel is dropping,” agrees Liz Carlson, a travel expert blogger who was recently named New Zealand’s top blogger, in an email. An American, Carlson lives in Wanaka, New Zealand. Most of her friends are foreigners, and Carlson says that each of the executive announcements, as well as laptop bans, have put many off from traveling to the land of the free and the brave.

She says, “Whenever I meet people traveling, everyone says something about it, and nothing is positive … My friends who have traveled there recently are worried about the rules where TSA can look through your phones or laptops.”

In March, after the second travel ban, Oxford Economics, an advisory and analysis firm, found that travel could drop by 8% due to the executive announcements and procedures to restrict immigration to the U.S.

“Our latest detailed findings confirm what our data has been predicting since the first travel ban. There has been a ‘Trump Slump,’ and the strong dollar has compounded it,” said ForwardKeys co-founder and CEO, Olivier Jager, in an email. “This must be worrying for the US economy – travel is a huge earner for the United States, and relative to the rest of the world, its tourism exports are losing ground.”

Tourism is the seventh largest employer in the US economy. In 2012, nearly 84% of travel companies identified themselves as small businesses.  For those Americans, the outlook is bleak.

Over the first three months of Donald Trump’s presidency, 697,791 fewer foreigners visited the U.S. than normal, down 4.2% to 15.8 million people, according to new figures released by the U.S. Department of Commerce. That drop accounted for $2.7 billion in spending, according to Tourism Economics.

In cities like New York, foreign tourists spend four times as much as domestic tourists, so even slight drops in inbound arrivals spell big losses for the U.S. economy. According to US Travel, international travel spending directly supports 1.2 million American jobs, accounting for nearly $32.4 billion in wages. the typical overseas traveler spends around $4,360 when visiting the United States, over an 18 night stay.

Cities across the U.S. have seen the writing on the wall and are bracing for declining tourism revenues. Los Angeles Tourism board led the charge earlier this year, putting millions towards a marketing campaign to welcome foreigners with a gigantic human powered sign that welcomed incoming planes in four languages. Other tourism boards have followed suit with their own campaigns.

But as the third executive announcement is implemented and the Supreme Court hearing on the previous travel bans is cancelled, many industry experts wonder if this is just the beginning of another lagging sector in the U.S. economy as tourists choose destinations with easier, more comprehensive visa policies.

Comment (D. Posnett):  I have wondered how a real estate mogul like Trump who owns hotels and golf courses does not seem to care about tourism.  It is interesting to follow stock prices of major hotel chains like Hilton and Marriott and see that they are doing just fine.  In fact, like Trump businesses, they are expanding internationally.  So perhaps this means that worldwide tourism is not that much affected.  It is just that international tourists are chosing to go elsewhere rather than visiting the USA.  For example, as the per Dan Caplinger in the Motely Fool: “Marriott sees prosperous days ahead. Sorenson noted that the international opportunity that the hotel company has is huge, pointing out that more than half of rooms under development are located outside North America“.

So much for those American jobs that Trump voters had bet on.

My name is David. I have a jewelry design studio. We make unconventional jewelry with unusual materials. We are located in East Hampton, NY, USA. I blog about all things pertaining to our jewelry. I cast a wide net. Subjects can be as diverse as the biology of anomia simplex (shells that we use for ear rings), a motorcycle trip in California, or the blood diamond trade...nearly anything is fair game!
View all posts by maidstonejewelry →
This entry was posted in economy, immigration/deportation, National Parks & Monuments, Travel Ban, Trump, Uncategorized, Zeldin and tagged hotels, job drain, jobs, tourism, trump slump. Bookmark the permalink.