A Cruel Joke — 13 men are in charge of healthcare for all American women.

As Republicans prepare for their delayed vote on their updated measure to repeal and replace the Affordable Care Act, women’s groups and senators have vocally hit out against male dominance of the healthcare debate – exemplified by the GOP’s 13-man working group that crafted the Senate bill.

The Democratic senator Kamala Harris told the Guardian the bill “is terrible for women”, while her New York colleague Kirsten Gillibrand has described it as “a cruel joke” and a “blatantly partisan attack on women’s health”.

But for many, it’s more than the substance of the bill that rankles. Specifically, it feels like a return to a kind of regressive gender politics they hoped had passed in America: a politics in which men make the decisions about what happens to women’s bodies.

“It’s outrageous that the future of healthcare for millions of women lies in the hands of 13 men,” Cecile Richards, president of Planned Parenthood, said. “It’s clear they don’t care about our opinion or our lives – because if they had asked us what we thought, we’d all be in a very different position right now.”

The Senate healthcare bill would increase the number of uninsured people in the US by 22 million, according to the non-partisan Congressional Budget Office, and is opposed by the American Medical Association on the grounds that it violates the Hippocratic oath.

It would also be particularly devastating to women’s health, in a number of ways. Patty Murray, the top Democrat on the Senate’s health committee, called it “nothing less than an attack on women’s health and rights”.

Harris said: “It blocks millions of women on Medicaid from getting care at Planned Parenthood. It allows states to stop requiring insurance companies to cover essential health benefits – like maternity care and birth control. Women in this country will not be silenced on this issue. We will only get louder.”

Under the Republican bill, women could pay as much as $1,000 more per month for maternity care, Murray told reporters in a conference call on Friday, and millions would lose access to even the most basic preventive care services at Planned Parenthood.

As Dana Singiser of Planned Parenthood put it on the call: “If we listed all the cruel things this bill would do we’d be here all day.”

Often the men who tout defunding Planned Parenthood seem to have no idea what the organization actually does.

“Frankly, I am sick of coming down to the Senate floor to explain to Republicans what Planned Parenthood does,” Elizabeth Warren said in a recent statement posted to her Facebook page. “I am sick of explaining that it provides millions of women with birth control, cancer screenings, and STI tests every year. I am sick of pointing out again and again that federal dollars do not fund abortion services at Planned Parenthood or anywhere else.” 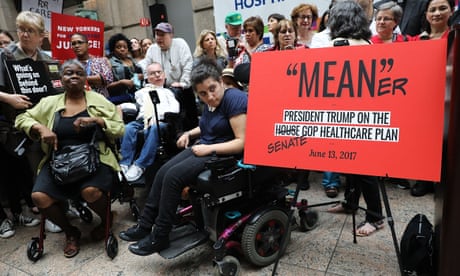 What are you doing to protest the Republican health bill?

Because of the Hyde amendment, federal funding does not actually go toward abortion services, but to the other basic healthcare services Warren outlined, including life-saving cancer screenings and treatments.

It isn’t the first time in recent years she has had to explain to the men in charge of women’s healthcare how the largest US provider of reproductive healthcare operates. When the GOP mounted another effort to defund Planned Parenthood back in August 2015, she made a similar speech.

“Do you have any idea what year it is?” Warren asked at the time. “Did you fall down, hit your head, and think you woke up in the 1950s or the 1890s? Should we call for a doctor? Because I simply cannot believe that in the year 2015, the United States Senate would be spending its time trying to defund women’s healthcare centers.”

Perhaps she shouldn’t have been that surprised. For years, Republicans have worked to strip away women’s rights to make choices about their own bodies and more often than not, the efforts have been led by men. When Donald Trump signed the global “gag rule”, pulling US funding from any global organizations that so much as mention the word “abortion”, he did it flanked exclusively by white men in suits. A photo of President George W Bush signing a ban on a rare abortion procedure reveals yet another group of grinning, self-congratulatory men. 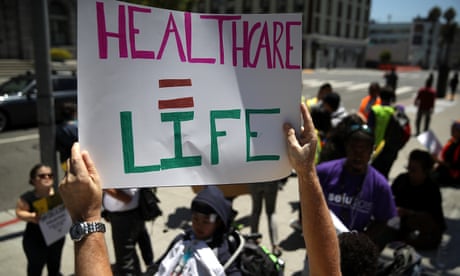 ‘I don’t understand why people have to struggle’: views on healthcare in Trump country

As Jill Filipovic, writing in the New York Times, has noted, in a way, men controlling women’s bodies is an election promise delivered. “At some point, we have to ask: Is this really a pattern of errors?” she writes. “Maybe these aren’t tone-deaf mistakes at all, but intentional messages to rightwing supporters.”

Warren seems to agree, at least with the notion that the bill is all about political messaging.

“Women come to the floor, we explain, we cite facts. But Republicans would rather base healthcare policy on politics than on facts,” she said recently, after the House speaker, Paul Ryan, called the bill “pro-life”. “Calling something pro-life won’t keep women from dying in back alley abortions; it won’t help women pay for the cancer screenings that could save their lives; it won’t help them take care of their families, have safe sex or afford their medical bills.”

Murray was even more sweeping in her assessment. “The moment we’re in right now is truly a pivotal one for women and women’s rights,” she told reporters Friday, adding that for every woman and everyone who cares about their access to healthcare, now is the time to fight back.

“Those 13 men cutting backroom deals about your healthcare access clearly didn’t want to hear from you, so make sure they do now,” she said.