By Amber Phillips May 31 in WaPo

President Trump has been in office for four months, and according to one of the best indicators of what he’s thinking — his Twitter account — he seems pretty frustrated about it. 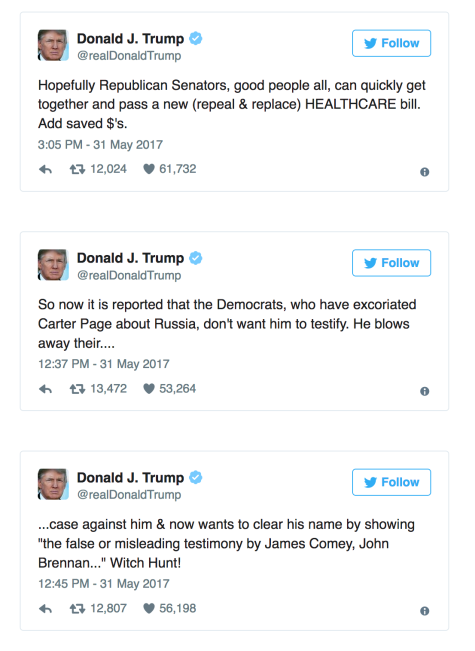 Which makes sense. Trump has hardly any legislative victories to tweet about but lots of news about his campaign’s ties to Russia to defend.

Congress hasn’t accomplished much, and it may not: Lawmakers have only seven weeks of work left before their five-week break in August.

What Trump has tried to do alone has been stopped by the courts. Then there’s the near-ceaseless news about the investigation into Russia meddling in the election and Trump’s ties to it.

Let’s take a moment to put all of that in context by looking what, exactly, is frustrating Trump

Republicans are already trying to pass health-care and tax legislation with just 51 votes.

1) They want to roll back the Affordable Care Act

The hold up: Republicans are trying to do this without Democratic votes, but divisions in their own party aren’t much easier.

2) Reform the tax code for the first time in decades

The hold up: Republicans are trying to do this without Democrats, but see above.

3) Pass a budget to keep the federal government open by Oct. 1

4) Raise the debt ceiling, which the Treasury Department wants done by August

The holdup: Republicans probably need Democrats’ support for this, too.

What Republicans in Congress have done is limited 1) They’ve put Judge Neil M. Gorsuch on the Supreme Court (after blowing up the 60-vote filibuster for Supreme Court nominations).

2) They’ve repealed more than a dozen Affordable Care Act regulations (but the obscure law they were using to do this over Democrats’ heads has expired).

What Trump has done without Congress is also limited But that got held up: Federal courts have paused both his travel bans.

But a federal judge said Trump’s method of doing this isn’t legal.

This will be caught up in courts, too.

4) He fired his FBI director because of “this Russia thing” (he has yet to name a replacement). Speaking of Russia, a lot has happened on that front

1) The FBI confirmed to Congress that it is investigating whether the Trump campaign helped Russia meddle in the U.S. election. 3) The Justice Department appointed a special counsel to have wide latitude to investigate Russia and Trump.

4) The House and Senate intelligence committees are also conducting their own investigations of Trump and Russia.

5) The media continues to report on the Trump campaign’s outreach to Russia as well as Trump’s ethically and legally questionable attempts to push back on accusations that his campaign may have worked with Russia.

On top of all this, Trump is also one of the most unpopular presidents in modern history and inexperienced in politics. Which means that even if Republicans in Congress were free of family problems, Trump isn’t in a position of strength to negotiate with them.

Call it a slow start for a newbie president, call it a Republican Party getting used to governing. Call it a witch hunt, if you want. But it’s clear that these first four months of Trump’s presidency are not playing out how Trump envisioned.