Poll: Public Views the ACA More Favorably Than Congress’ Plan to Replace It, Though Republicans Favor the Replacement

Majority Says the Senate Either Should Make Major Changes or Not Pass The House Bill At All, While About a Third Want the Senate to Pass It As Is or With Only Minor Changes Public Grows More Pessimistic About How Repeal Will Affect Them Personally

Most (55%) of the public holds an unfavorable view of the Congressional plan that would repeal and replace the Affordable Care Act, and the same share (55%) want the Senate either to make major changes to the House-passed bill or not pass it all, finds the latest Kaiser Health Tracking Poll. 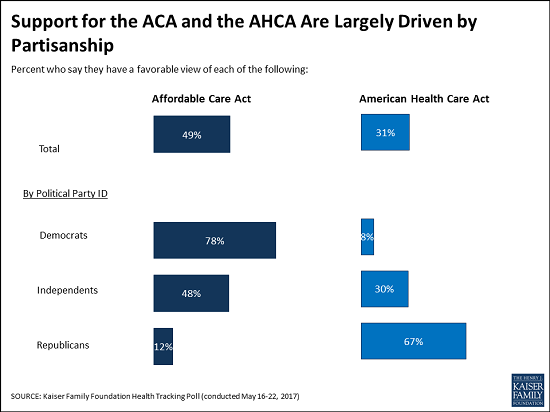 In spite of these views, a majority of the public (74%) believe it is” likely” that the president and Congress will repeal and replace the ACA. At the same time, relatively few say the Senate should adapt the American Health Care Act as passed by the House (8%) or with only minor changes (24%). Most want the Senate either to make major changes (26%) or not pass it at all (29%).

Public Growing More Pessimistic About How Repeal Would Affect Them Personally

The poll also finds the public more pessimistic about the replacement bill now than they were in December after the elections but before Congress put forward specific legislation. Nearly half (45%) of the public now says the replacement bill would result in higher health care costs for their family, compared to about a quarter (28%) who said so in December. In addition, a third now expect their ability to get and keep health insurance and the quality of their health care to get worse under the pending bill, compared to about one in five that said so in December. 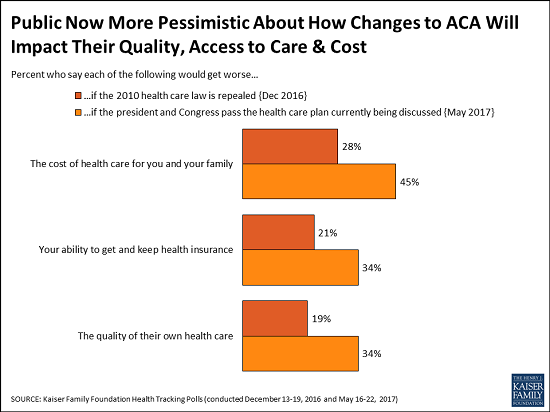 The poll also includes additional questions on Medicaid, which will be released separately later this week.

Designed and analyzed by public opinion researchers at the Kaiser Family Foundation, the poll was conducted from May 16 – 22 among a nationally representative random digit dial telephone sample of 1,205 adults. Interviews were conducted in English and Spanish by landline (421) and cell phone (784). The margin of sampling error is plus or minus 3 percentage points for the full sample. For results based on subgroups, the margin of sampling error may be higher.

Filling the need for trusted information on national health issues, the Kaiser Family Foundation is a nonprofit organization based in Menlo Park, California.

This entry was posted in ACA, AHCA, Congress, Health Care. Bookmark the permalink.