Cruelty Wrapped in a Lie

David Smith in Washington and Dominic Rushe in New York

Donald Trump will embrace hardline right-wing economics on Tuesday with a budget that proposes swingeing cuts to social safety net programmes while allocating $1.6bn to a border wall.

Millions of people would lose access to Medicaid, the government insurance programme for the poorest and many disabled Americans. Food stamps for people on low incomes would be cut over the next 10 years under the White House plan and the families of undocumented workers would be frozen out of key tax breaks.

The Trump blueprint is unlikely to become law because it will face opposition from both moderate Republicans and Democrats worried about its social impact and from fiscal conservatives who fear it will increase the deficit.

Chuck Schumer, Democratic minority leader in the Senate, condemned the proposed cuts to Medicaid. “This would pull the rug out from so many Americans who need help: those suffering from opioid and heroin addiction, people in nursing homes and their families who care for them, the elderly, the disabled, and children,” he said on the Senate floor.
Medicaid helps not only the poor but increasingly the middle class, as well as 1.75m veterans, Schumer added. “Here’s what candidate Trump said when he campaigned: ‘I’m not going to cut social security like every other Republican and I’m not going to cut Medicare or Medicaid.’ He promised he would help take care of those suffering from opioid addiction. If it cuts Medicaid, he’s breaking that promise right in half.

Economic experts were also quick to dismiss Mulvaney’s claims that Trump’s tax plans and budget would boost economic growth to 3%, balancing the federal budget within a decade.

Although Trump is an unconventional president, the budget shares much with the conservative orthodoxy of Ronald Reagan and Margaret Thatcher. It is entitled “A New Foundation for American Greatness” and Mulvaney said if he had a subtitle it would be, “The taxpayer first budget”.

Cuts to Medicaid over the next decade exceed even the more than the $800bn reductions contained in a health bill passed by the House of Representativesearlier this month.

The president also aims to slash welfare by $274bn over a decade, including $193bn on food stamps, driving millions of people off the programme. This would be several times bigger than cuts attempted by House Republicans in the past. The number of people claiming food stamps spiked to 47m people at the height of the 2007-08 recession and had not come down as expected, still totalling 44m people, Mulvaney said, despite near full employment in the US.

Some $72bn over 10 years would come from social security’s disability insurance programme, including $50bn in savings which would be achieved by helping recipients get off the programme and find a job. 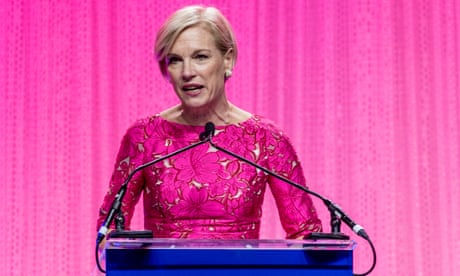 Planned Parenthood head: ‘Being a woman is now a pre-existing condition’

He added: “There’s a dignity to work and there’s a necessity to work to help the country and succeed and we need everybody to pull in the same direction.”

The Child Tax Credit and the Earned Income Credit would be limited to those who are authorised to work in the US. They would be required to show proof of a social security number – a move that would have a negative impact on children who are US citizens but whose parents are undocumented.

“I could ask you for your money I think, in good faith and good conscience, and say, ‘Look, I need to take some of your money and give it to this family, who deserves the Child Tax Credit, but I can’t do it to give the Earned Income Tax Credit, which is designed to help folks who work, to give it somebody who’s in the country and working illegally. It’s just not fair. It’s not right when you look at it through the perspective of the people paying the taxes.”

He also promised a “groundbreaking” proposal to provide six weeks of paid family leave to new mothers and fathers, including adoptive parents, championed by Trump’s daughter, Ivanka, and costing $25bn over 10 years.

Mulvaney confirmed that the budget plan defunds Planned Parenthood, on the premise that the American Health Care Act will become law, and “winds down” the support for the Corporation for Public Broadcasting, which feeds the money to outlets such as the Public Broadcasting Service and National Public Radio.

The blueprint also shaves 31.4% off funding for the Environmental Protection Agency and 29.1% off that for the state department and other international programmes.

The cuts to domestic spending would be redirected to the US military, law enforcement and supporting veterans. It allocates $2.6bn to border security, including $1.6bn for the “bricks and mortar construction” of a wall on the Mexican border, with the remaining $1m allotted to “technology and infrastructure”.

But the plan – a wish list to fund the Trump agenda – faces numerous hurdles. The healthcare bill is likely to undergo significant changes in the Senate while a rewrite of the tax code only has a broad outline so far. It also makes assumptions about growth.

Mulvaney said Trump’s package of spending cuts and tax breaks would boost the US’s economy’s growth rate to 3% over the next decade, a considerable increase from the 1.9% forecast under current policy by the Congressional Budget Office.

The director, due to testify to the House and Senate this week, said: “I think what Trumponomics is – and what this budget is a part of – is an effort to get to sustained 3% economic growth in this country again. I think it’s sad that the previous administration was willing to admit that we couldn’t get better than 1.9% growth over the next 10 years … That assumes a pessimism about America, about the economy, about its people, about its culture that we’re simply refusing to accept. We believe that we can get to 3% growth.”

But economists were skeptical of the claim. Gus Faucher, PNC Financial Services’ chief economist said US productivity growth had averaged 1.75% over the last 45 years and that the period between the late 1990s and early 2000s when growth topped 3% was the exception. “It’s asking a lot to expect the exception not the rule,” said Faucher.

Marc Goldwein, head of policy at non-partisan thinktank Committee for a Responsible Federal Budget said the budget’s numbers did not add up. He said Mulvaney’s promise of returning to the 3% growth rates were “unrealistic at best”.

“We are not bringing the ‘90s back,” he said. “Three percent was normal then because the baby boomers were in their prime and we had a tech boom.” Now baby boomers are aging out of the workforce and the tech boom’s impact has fizzled, Trump’s budget would likely add “decimal points not percentage points” to US growth, he said.

“This is like pretending you have won the lottery when all you have is a handful of scratch cards,” he said.

This entry was posted in budget, Medicaid, Tax Reform, Trump. Bookmark the permalink.