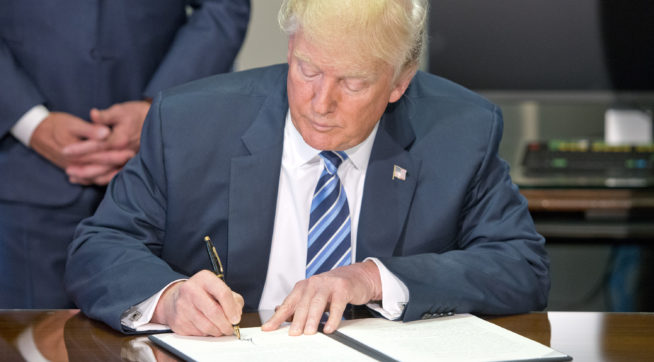 Mr. Trump signed an executive order Thursday to establish a commission to investigate voter fraud.  The signing comes months after Trump claimed he lost the popular vote because of  voter fraud, claiming that between 3 million and 5 million people voted illegally in last year’s presidential election.  The administration has come forward with no evidence to support this claim.

The commission, which will be chaired by Vice President Mike Pence and have Kansas Secretary of State Kris Kobach (a Republican) as its vice chair, is directed to  review policies and practices that enhance or undermine the American people’s confidence in the integrity of federal elections ― including improper registrations, improper voting, fraudulent registrations, fraudulent voting and voting suppression, according to the White House.

However, the text of the order, which is formally called the Presidential Advisory Commission on Election Integrity, says it will study “laws, rules, policies, activities, strategies, and practices” relating to election processes.  While the order does not specifically mention voter suppression or barriers to voting, the committee is formally tasked with investigating both voter fraud and suppression.  Unfortunately, Kobach’s appointment sends a clear signal that while the stated purpose of the commission will be focused on combatting fraud, it is more likely that it will identify voting restrictions that will operate to suppress voting.

Mr. Kobach pushed one of the most restrictive voting laws in the country, which required Kansas residents to show proof of citizenship when they registered to vote and photo ID when they go to the polls.  If residents could not prove properly provide proof of citizenship, they were placed on a “suspense list” for 90 days and then purged from the voter rolls.

A report by the Kansas Advisory Committee to the U.S. Commission on Civil Rights found that the 2011 law “may have been written and implemented with improper, discriminatory intent.”  In his testimony to the panel, Kobach said the only burden the photo ID requirement could possibly impose was the effort needed to reach for a wallet to pull out identification.  Kobach’s voter fraud law has been challenged in court because the proof of citizenship requirement arguably created an unnecessary obstacle to voting and discouraged low-income, elderly and minority residents from voting.  A federal appeals court blocked Kansas from implementing the proof of citizenship requirement.

Read the text of the executive order below:

By the authority vested in me as President by the Constitution and the laws of the United States of America, and in order to promote fair and honest Federal elections, it is hereby ordered as follows:

(a) those laws, rules, policies, activities, strategies, and practices that enhance the American people’s confidence in the integrity of the voting processes used in Federal elections;

(b) those laws, rules, policies, activities, strategies, and practices that undermine the American people’s confidence in the integrity of the voting processes used in Federal elections; and

Sec. 4. Definitions. For purposes of this order:

(d) The term “fraudulent voting” means the act of casting a non-provisional ballot or multiple ballots with knowledge that casting the ballot or ballots is illegal.

Sec. 6. Termination. The Commission shall terminate 30 days after it submits its report to the President.

Sec. 7. General Provisions. (a) To the extent permitted by law, and subject to the availability of appropriations, the General Services Administration shall provide the Commission with such administrative services, funds, facilities, staff, equipment, and other support services as may be necessary to carry out its mission on a reimbursable basis.

(b) Relevant executive departments and agencies shall endeavor to cooperate with the Commission.

(c) Insofar as the Federal Advisory Committee Act, as amended (5 U.S.C. App.) (the “Act”), may apply to the Commission, any functions of the President under that Act, except for those in section 6 of the Act, shall be performed by the Administrator of General Services.

(d) Members of the Commission shall serve without any additional compensation for their work on the Commission, but shall be allowed travel expenses, including per diem in lieu of subsistence, to the extent permitted by law for persons serving intermittently in the Government service (5 U.S.C. 5701-5707).

(e) Nothing in this order shall be construed to impair or otherwise affect:

(i) the authority granted by law to an executive department or agency, or the head thereof; or

(ii) the functions of the Director of the Office of Management and Budget relating to budgetary, administrative, or legislative proposals.

(f) This order shall be implemented consistent with applicable law and subject to the availability of appropriations.
(g) This order is not intended to, and does not, create any right or benefit, substantive or procedural, enforceable at law or in equity by any party against the United States, its departments, agencies, or entities, its officers, employees, or agents, or any other person.

This entry was posted in Executive Order, Voter Fraud. Bookmark the permalink.